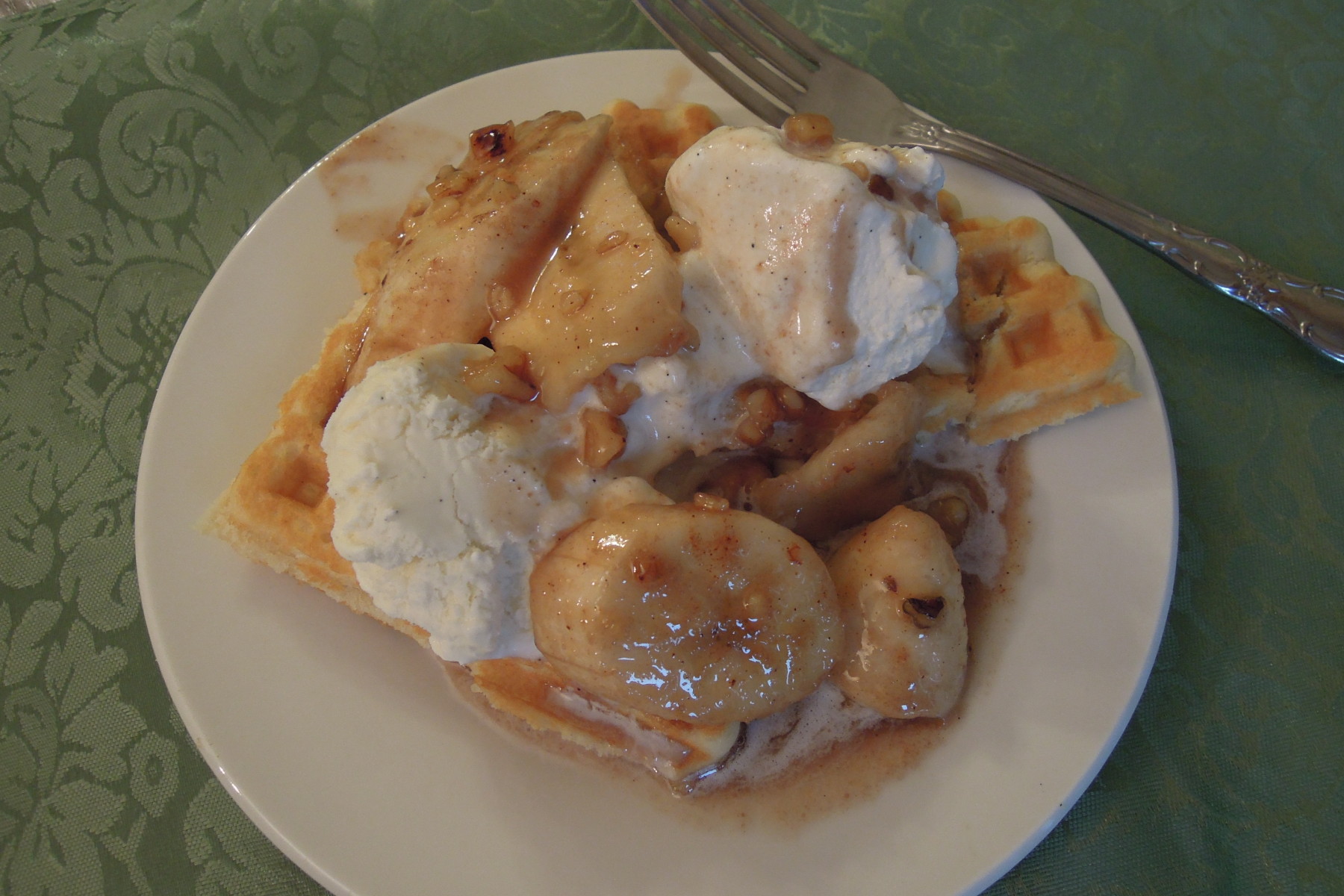 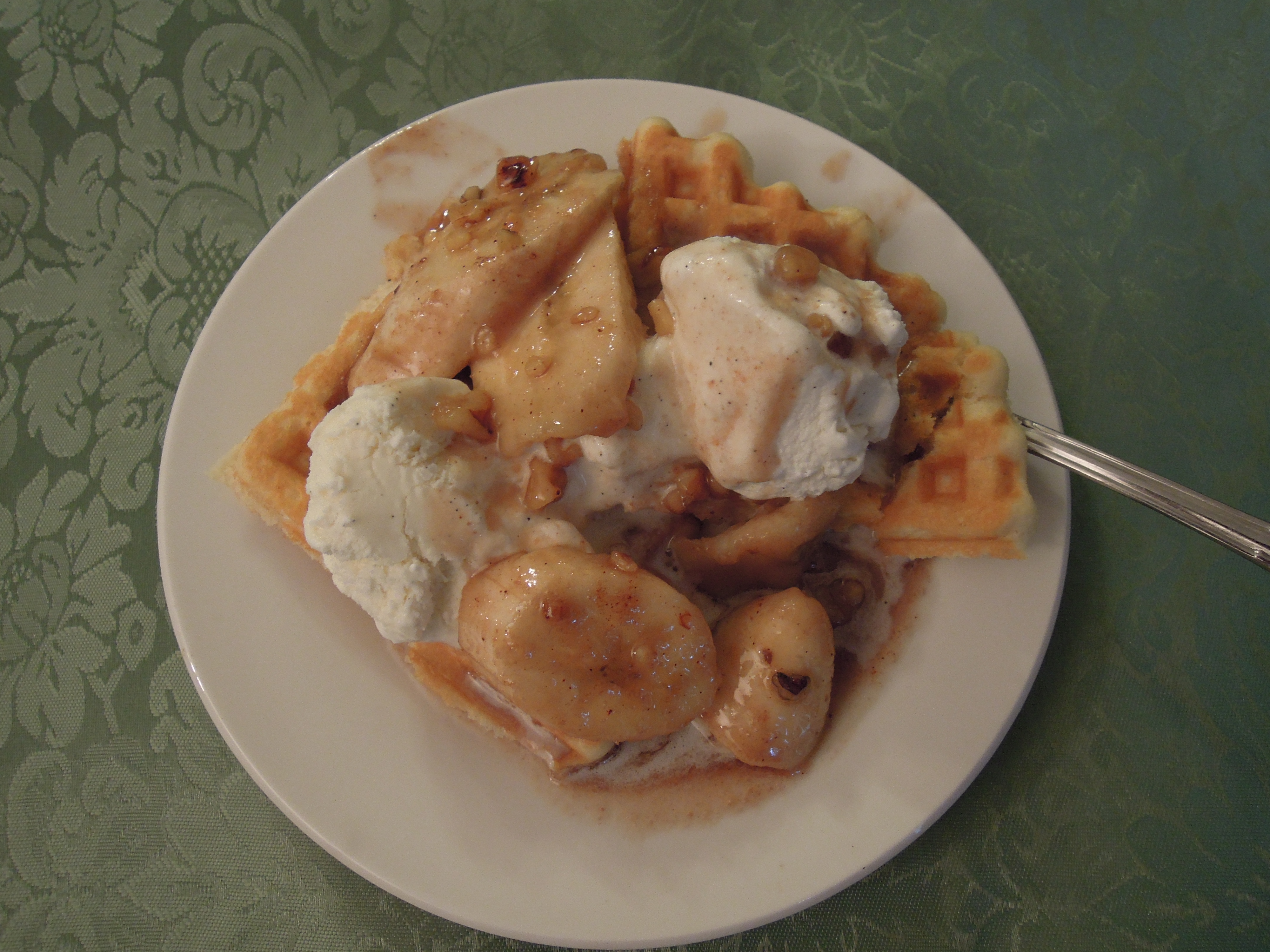 Wednesday was the 10th anniversary of the first time Terry and I met. We met through an online personals ad, but our first in-person meeting was at a Mimi’s Restaurant for dessert. I don’t remember exactly what the dessert was, and they no longer serve it, but I know it was Bananas Foster something. I believe it was a cake or pie. I remember that it was wonderful. (I must have thought Terry was too because I agreed to see him again.) 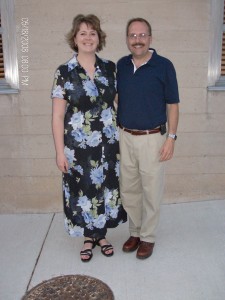 Some time later (perhaps our first anniversary?), we went to a Sunday brunch at an upscale restaurant here in town, and they served Bananas Foster as part of the meal. Oh. My. Goodness. I LOVED it! I remember that it was cooked and lit on fire right in front of me while a fresh Belgian waffle was being prepared. The hot waffle was topped with cinnamon ice cream and then the lovely Bananas Foster sauce. I was in heaven. I’m not sure why this dessert made such an impression on me. I like bananas o.k., but I have never been able to get past the taste of alcohol–this does not seem like the profile of a Bananas Foster fan. The combination of the hot, crispy waffle, the smooth sauce, and the lovely sweetness of the banana worked for me. 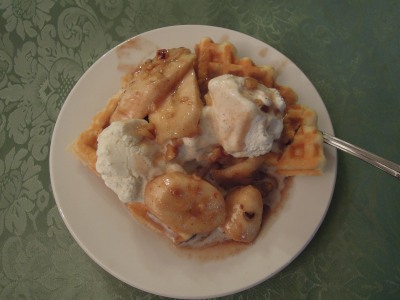 I decided that for our 10th anniversary, I would make Bananas Foster at home as a surprise and celebration. After researching the recipe, I learned that I would need dark rum. Dark rum? I wondered if maybe the restaurant left it out when I had it because I clearly do not like the taste of alcohol. A mild anxiety set in as I realized I’d need to go to the liquor store. I told a friend of mine that going to the liquor store gives me the same feeling as going to the mechanic. Cluelessness, vulnerability, and impending doom.

I wandered into the store the other day, trying to look confident. I stared long and hard at the rum shelves. The recipe said “dark rum.” Would it say “dark rum” on the label or do I just pick one that is darker than the others? I didn’t have a clue. Finally, I selected one. I then went in search of banana liqueur because many of the recipes also called for it. I found the right aisle, and then my eyes glazed over as I stared at every flavor except banana–apple, peach, cherry, almond…

It didn’t take long before one of the employees asked me if I needed help. She helped me find the banana liqueur, and then I showed her my rum choice for Bananas Foster. She stared at me as if I had grown an extra head. “That’s spiced rum.” I stared dumbly because I didn’t know what she meant. Yes, I could read “spiced rum” on the label, but I didn’t know if that was a bad thing or a good thing. It was darker than many of the other rums on the shelf, so I thought it would work. She shook her head pityingly and took me back to the rum aisle to get “something really good.” She clearly likes her rum and could not conceive of any other rum I could possibly use except what she showed me. This is how I ended up with Myers’s Rum which actually cost half again what the spiced rum would have been. Oh well. I was sure of one thing–the rum lady at the liquor store knew far more than I on the subject. When I questioned her about the availability of a smaller bottle, she told me I would use this up in no time because I could put it in “everything” to give it a little “oomph.”

I am no expert on making Bananas Foster, but I can tell you that it was a hit at my house and was worth the humiliation of going to the liquor store. Once you have your ingredients assembled, it only takes about 5 minutes to make it. We poured it over a fresh waffle and some vanilla bean ice cream. Yum. 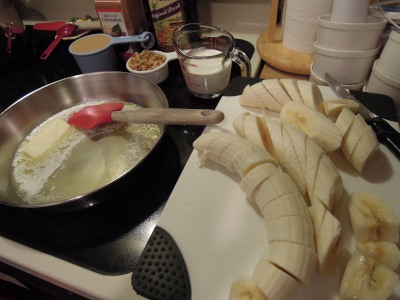 Source: Adapted from The Pioneer Woman. The original restaurant for Bananas Foster was Brennen’s in New Orleans. I have not tried the Brennen’s recipe yet, but I may soon. Gotta use all that extra rum. 😉