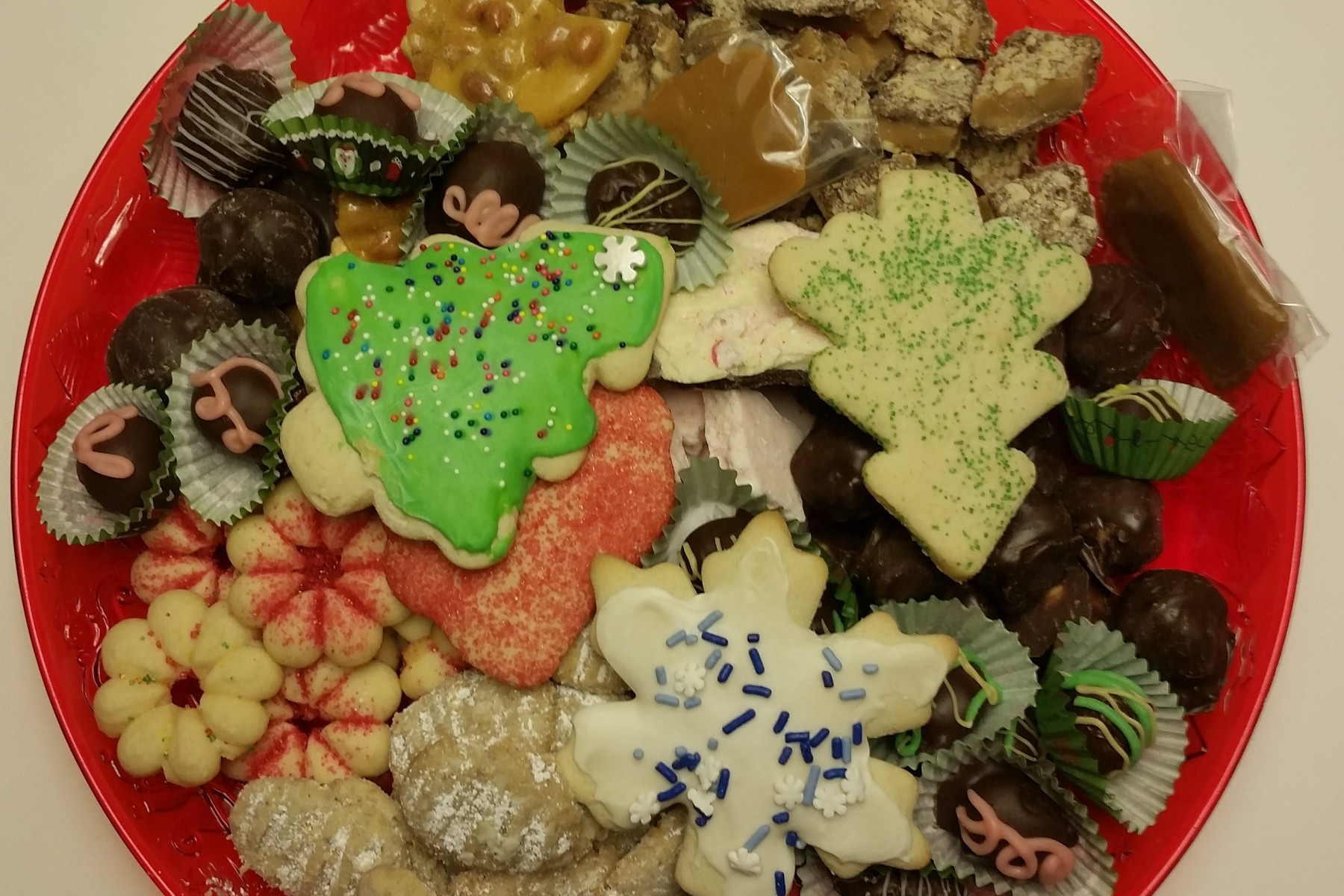 Christmas traditions are precious to many families. For some, it is the family gathering together for a meal, attending a midnight Christmas Eve service, the decision about when it’s time to open the presents, or maybe some special ornaments or decorations that come out every year. A common tradition is to make some of the same foods and treats year after year.
For my boyfriend Terry’s kids, their mom, and grandma, it is a Christmas baking and candy factory tradition that goes back as far as any of them can remember. Mom Kim says they have always loved baking in her family and she recalls making goodies at Christmas every year. “Kid” Devin (who is now 27) thinks the actual “candy factory” began around the time he was in fourth grade.
Kim says it kind of started out as a way to give Christmas presents without necessarily spending a lot of money—gifts of love. Devin and his sister Angie would bring trays of Christmas goodies to their teachers at school as gifts. Kim and Grandma Eve would bring trays to their co-workers. As time went on, the list of recipients grew bigger and bigger because once a person got on the list, he or she never wanted to be off the list. Devin and Angie would deliver trays to their current teachers but then also go back to all of their previous years’ teachers too. With so many subjects and teachers in high school, you can imagine the list became very long.

When Angie and Devin were still in school, they would take a day off from school for a “baking day” with the school’s and teachers’ blessing while Mom and Grandma took a day off from work. Baking day is now at least two days and is more complicated to arrange with grown kids and limited vacation time, but somehow they still manage to make it work and keep the tradition going.

You might think the recipient list has grown smaller now that Devin and Angie are grown and Grandma is retired, but that doesn’t seem 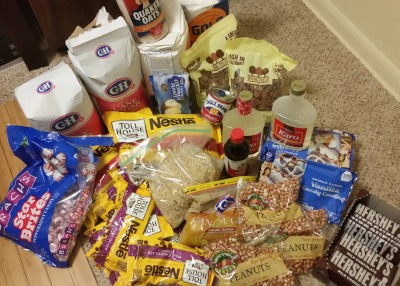 to be the case. There are family members, friends, new co-workers, neighbors, old teachers, and everyone you can imagine. The number of batches of goodies just gets bigger each year. The budget for these “thrifty” gifts continues to grow too. They estimated $400 in ingredients for this year’s baking. The factory has grown so big that Devin has actually put together an extensive spreadsheet of ingredients, so they can more easily calculate how much to buy.

A few weeks ago, I received permission to join in on one of the baking days in order to write this post and was informed that I was welcome to come but that I would “be put to work.” The traditional initiation to participate in baking day includes having to roll peanut butter balls. The kitchen was full of slightly evil laughter as they mentioned friends and previous significant others who had been “trapped in the corner.” Rolling peanut butter balls doesn’t sound like a hard task until you realize the quantity you are dealing with and the quality control measures. The balls must be rolled by hand (no cookie scoops for these people), they must be uniform, and they must be very small for the best dipping and for the best chocolate to peanut butter ratio. Peanut butter balls that are too large get dubbed, “Shrek Balls,” a disgrace for sure. The visiting “guest” is placed into a back corner of a tiny “two butt” kitchen filled with people who are busily making multiple things at once. During my visit, the back corner was occupied by Aunt Cindy, so I was mostly off the hook and only rolled a few balls for the sake of tradition.

For my initiation, they decided that I needed to make a batch of toffee. The toffee can be kind of fickle. I was informed that there is almost always at least one flop batch each year. I really hoped it wouldn’t be mine as they explained to me all the stages of toffee making that I would likely see. I have done quite a bit of baking and candy making myself, so I was fine when they told me the butter and sugar would bubble up and get foamy at first then transition to a more grainy and sticky stage, but it became a little bit scary when they mentioned the “play dough,” “brains,” and “butter completely separates” stages. Thankfully, my batch wasn’t the year’s flop.

The peanut butter balls and toffee are my two personal favorites on the treat trays, but the family informed me that there are 8 must-have recipes that have been on the trays since the beginning: fudge, lady fingers, peppermint bark, toffee, peanut butter balls, sugar cookies, peanut brittle, and spritz cookies. A few recipes have been added over the years such as truffles or tried for a year and then abandoned, but the original eight remain. One of the memorable disasters was the year they decided to make black licorice. Angie says, “That was highly entertaining. We tried to manipulate the putty-like substance into a taffy type candy, but we ended up pulling it between two people on opposite sides of the kitchen and dropping it. It was also a terrible light purplish grey color that made us smell like anise the rest of the day.” Not surprising that licorice has never had another appearance on the Christmas goodie trays. 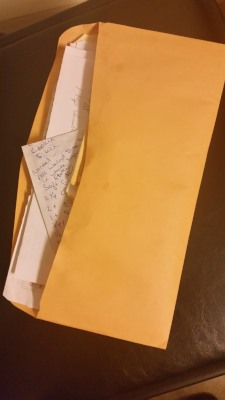 The recipes themselves are mostly scraps of paper that are stuffed into an old manila envelope. Some are from relatives or newspaper clippings and the like. I had to laugh when they handed me the toffee “recipe.” It was a scrap of paper with four ingredients listed: 1 cup white sugar, 1 cup salted butter, 3 T cold water, 1 t. vanilla. That was it. No instructions about what to do with these things. When I copied the recipe, I added a few more details. “Brains” is actually one of the cooking stages I listed. The recipes are mostly minimal, but they all know exactly what to do with them. They also know that “butter” does not mean any butter you happen to find. They swear by King Soopers brand salted butter for the toffee, no exceptions. These are the details that make these their goodies like no others. 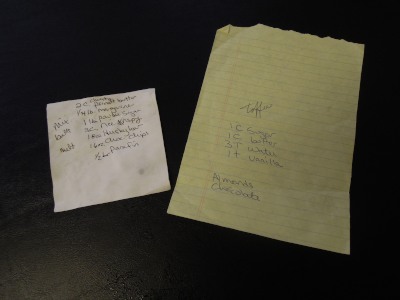 Since I asked nicely and reminded them that the toffee and peanut butter balls are my favorites, they graciously offered me their recipes to share with you. I will try to give you a little more information than just ingredients. 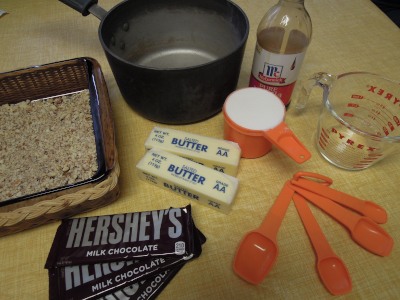 *This recipe is believed to be from Devin and Angie’s other grandma originally.

For dipping: (you may need more or less depending on the number of balls you make)

These recipes are among my favorite Christmas treats, but, as delicious as the treats are, they do not compare to the gift of the family tradition. I am sure not everyone gets along ALL the time, and I am sure there are some sharp words shared in the kitchen sometimes; some sacrifice is probably involved in picking dates for the baking days, but everyone shows up year after year to bake, laugh, get their hands dirty, make memories, clean up the messes, share the successes and failures and share their gift of love with others. It is a blessing to behold three generations of family combining their resources and contributing their individual gifts and talents to the greater whole–all the best ingredients for a Merry Christmas. 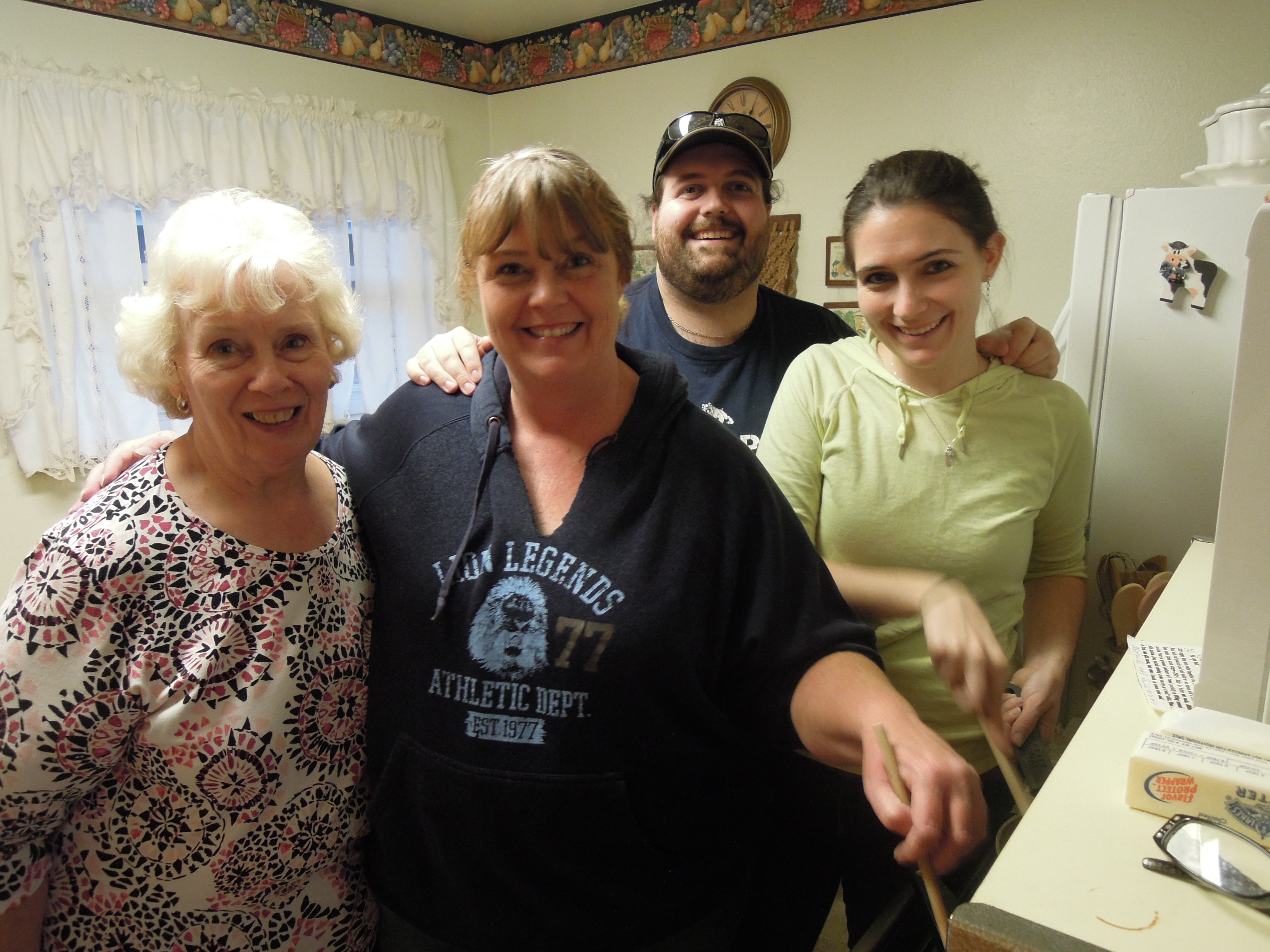