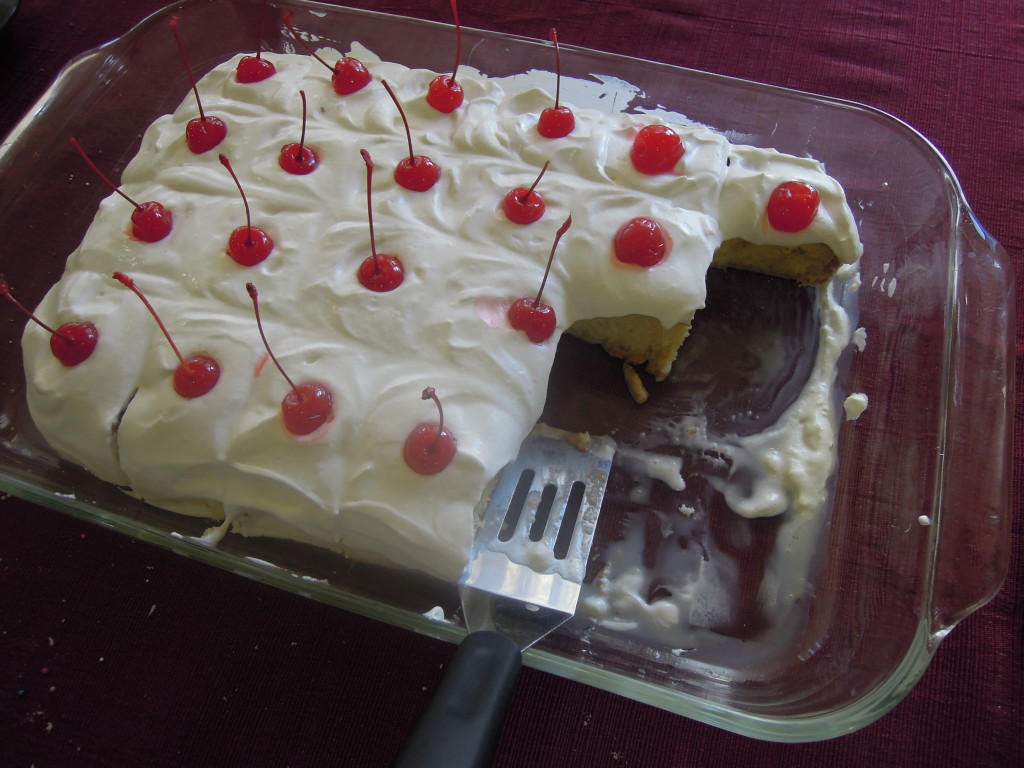 Cinco de Mayo is coming soon, so if you need an idea for something to bring to the party, this is it. Heck, even if you have absolutely no connection to Cinco de Mayo nor have any parties to go to, make this cake just because you can. Tres Leches cake does not look like much…yellow or white cake with some whip cream on top. Big deal, huh? Wait until you taste it.

Mmmmmm. It is so good. I am not normally that thrilled with cakes. I can easily decline a piece at social gatherings, but this is something special. I am not entirely sure what makes it so extraordinary to me. It is super moist and light tasting and has a lovely almost caramel hint in the flavor. It also has a touch of cinnamon and is topped with a cherry. It looks so creamy and pretty, and it makes my mouth happy.

Tres (trace) Leches (letch-ays) means “three milks.” What makes the cake so moist and delicious is that it is soaked overnight in a mixture of three milks: evaporated, sweetened condensed, and cream. You would think that it would become soggy, but it does not. The cake is sponge cake, and it just soaks up all that sweet milky goodness and holds on to it. Now if you are lactose intolerant, this may not be the best choice for you… But for everyone else, this is a sweet taste of heaven. Gracias!

Disclaimer: I have never had authentic tres leches cake from someone who grew up with the stuff nor have I had it made by a restaurant or bakery that should know how to make it. The cake is a popular Latin American dessert, so my German-Swedish-Norwegian rural Minnesota upbringing has no frame of reference at all. The only tres leches cake I have had is this one. I cannot tell you how authentic it is, but I can tell you this: It is darn good! If you need more convincing, I can tell you that Terry the chocoholic could not keep himself from going back for another sliver and another sliver when I first made this several years back. We all wanted seconds.

For the three milk mixture:

For the topping: (to make this easier and faster, you could just use Cool Whip, probably a 12 oz. tub, instead of whipping fresh cream) 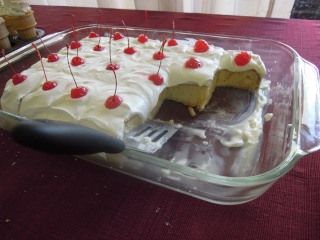 ← Strawberries and Cream Cake Roll
Tin Can Gifts and Favors →